Compounding this problem is the often times misguided public perception of the ease with which conception occurs. Estimates are that one in six couples will have difficulty in conception, which is defined as a lack of pregnancy after 12 months of the attempt.

The perception that infertility is more common now than in the past may have some merit. The problem itself has not really changed that much, but some changes in societal norms have contributed to the problem.

Specifically, couples are getting married later in life and dual-career choices have also had an effect in deterring childbearing until a later age in life. Unfortunately, these trends have an undesired effect on the declining fertility rates as age has a very important detrimental effect on the ability to conceive.

The peak of the reproductive years is probably in the mid-20s. Fortunately, the conception rates for many couples remains reasonably high into the early 30s, but it is at that age where in fertility rates begin to decline.

It is this concept of the declining fertility with age that is so poorly recognized amongst most couples. When people see public figures conceive well into their forties, it leaves the impression that any age in life is as good as the next. Often times when conception does occur in the latter reproductive years it is with great delay/difficulty or with the help of assisted reproductive technologies such as IVF.

When a couple comes to the Rocky Mountain Center for Reproductive Medicine, an initial history is taken to identify any predisposing factors that would lead to infertility. A menstrual history can sometimes be revealing and lead to a relatively simple treatment solution.

Other times the history may lead to a more difficult problem, such as a history of an appendicitis or pelvic pain in the female partner. Both of these can increase the probability of pelvic scar tissue that results in increased difficulty in the transfer of an egg (oocyte) from the ovary to the fallopian tube. Without this transfer, conception cannot occur naturally. In such cases surgery or in vitro fertilization may be of the most benefit. Once the history is completed, the general infertility evaluation begins.

Early in the evaluation it is generally best to determine if ovulation is occurring. A lack of ovulation is estimated to occur in approximately 20% of women and irregular menstrual intervals are the biggest clue to this possibility. “Fertility testing” that can be done at home includes charting temperatures daily in a log called a basal body temperature (BBT) chart. An increase of 1°F is typically seen when ovulation occurs. Another home test involves the use of an over the counter test called an ovulation predictor kit.

Unfortunately, neither of these tests are sufficiently accurate in many women to be used reliably. Simply charting the interval between the periods together with a single blood test (progesterone) are better determinates of ovulation. 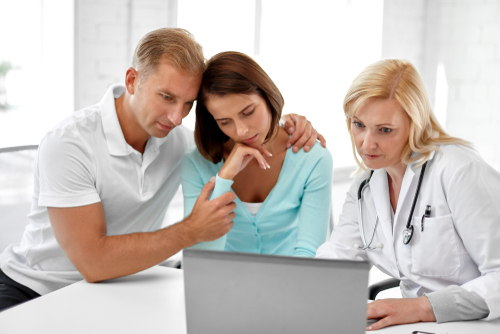 A semen analysis is another fertility test done early in the infertility evaluation as approximately 20% of all couples are found to have this as the exclusive problem. In another 30% of couples, a problem with the sperm is compounded by an additional factor found in the female partner.

Unfortunately, lifestyle issues such as hot tub exposure, etc., have little effect on sperm counts. With rare exceptions, neither do medications or surgery. When the first semen analysis result is below normal, it is important to understand that a simple fever associated with the flu can temporarily affect sperm counts. Consequently a repeat analysis is generally performed if the first assessment is abnormal.

To determination if an abnormality exists with the uterus or fallopian tubes an ultrasound and/or a hysterosalpingogram (HSG) is usually performed. Ultrasound is a painless method to ascertain if uterine tumors are present which could affect conception or the chances of miscarriage.

An HSG is one method to determine if tubal patency exists. If, for example, an appendicitis or endometriosis resulted in occlusive scarring of the end of the fallopian tube, an HSG is well-suited to detect this problem. Other types of tubal blockage are more subtle and may escape detection. 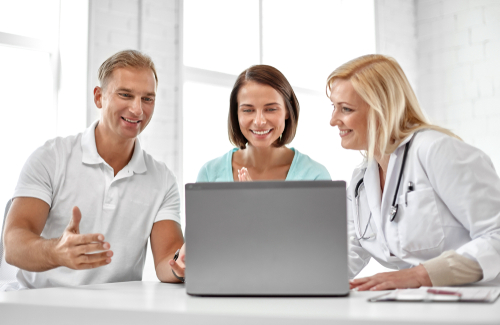 Treatment of infertility is dependent on what abnormalities were found in the fertility testing. Fertility drugs can be given when a simple lack of ovulation is identified. When an anatomical problem is identified, surgery is sometimes necessary.

When a problem is identified with the semen analysis, inseminations (IUI) are an effective method to help increase the number of sperm that reach the fallopian tubes where fertilization occurs. The technique involves placing suitably washed sperm in a thin flexible catheter and inserting it past the cervix into the uterus. Typically, though, this works better when the female partner is given medication to gently stimulate the ovaries into producing a modest increase in the number of oocytes (eggs).

The most aggressive technology for infertility treatment is called in vitro fertilization (IVF). It is effective for nearly any type of abnormality found. It requires extensive monitoring, a minor surgical procedure to retrieve the oocytes, and at times a delicate microscopic procedure to assist with fertilization.

Over the years, this technique has increased in success, in particular for younger aged individuals. It is not uncommon to have conception rates in excess of 60% per attempt, which is several times higher than inseminations.

Another topic that has received considerable attention in recent years is the occurrence of multiple pregnancies such as twins or beyond. Certainly, the “octomom” story highlights the medical and social concerns that exist for both the mother and the babies. We are proud of the fact that our multiple pregnancy rate is low (5 to 10%) in IUI cycles.

Costs are always a consideration for any medical treatment. In the past, insurance generally avoided any coverage for fertility testing or fertility treatment. Today an increasing number of companies have seen the wisdom of providing for at least some coverage as they recognize the extreme importance of this issue in the lives of so many couples.